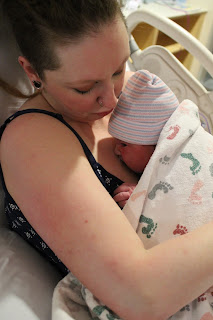 When we got into the hospital, the contractions quickly started getting stronger and stronger. I was already exhausted and losing momentum emotionally, but I was excited that things were most likely progressing. In my hormonal, labor-crazy state, I allowed my doula to rub my neck. Since I hate being touched by anyone, this either shows immense trust in her support or the degree of psychosis I was under. Maybe both. Who knows.
(10p.m. ) I agreed to be checked, and was 4 cm and 100% effaced. I was frustrated, but my doula assured me that now that I was fully effaced, everything would go much faster. I got admitted and they got me into a room.
I was monitored for a while, and needed counterpressure for back pain. Baby was still not positioned well and I had a bulging bag now. I had been moaning and growling through contractions the whole day, which is strange since I am usually silent until the very end. I didn’t realize until after he was born that I was actually having back labor the whole time. The doula helping with positions and all of that made so much of a difference that I didn’t quite recognize that I was having the back labor. She even asked throughout if I was feeling it in my back but it just didn’t register. The funny part is that I had decided days ago that if I was having back labor (like I did with Dash) I would get an epidural. So much for that!
(12a.m.) I was checked again, and told I was now 6-7cm. It wasn’t what I was hoping for, but I knew it had to go fast now. It was encouraging that I had gone from 4 to 7 in only two hours.
I labored on the ball, and labored in the shower. It was all textbook laboring except pain was intense. I felt like I had been in transition for days.
It was only a few contractions and I suddenly felt like I HAD to be in transition and just about done. I was feeling enormous pressure, and during one contraction, I literally felt the baby slide down a significant amount. I think the is when he finally got down and engaged – although the little booger was still not quite positioned correctly and I could feel it. Thanks a lot Griff for making me earn every ounce of you.
I agreed to be checked again and perhaps have my water broken if it was warranted. I had wanted to hold out and not have it done prematurely, but my doula was seeing how intense things were and explained it might get things over a little quicker and get him down and positioned the right way so I wanted to know how close I really was.
And here is where things got interesting….
The doctor came in and started to check me. She announced that I was maybe an 8 or a 9, and said something about breaking my water. My doula looked at me, as I was laying there on my back in between contractions, and asked, “Do you want her to break your water?”
Before I could answer I felt a strong gush as my bag of waters ruptured. I didn’t even realize what had happened. I thought for a second that maybe it was so close to breaking that it happened just from her checking me.
The room was completely silent and everything stopped as my husband spoke up.
“What did you just do? That was not okay!”
The doctor tried to argue. She insisted that she was “trying to do her best” or some such nonsense.
He wasn’t yelling, but you could tell he was incredibly angry.
“No, you weren’t. You did that without even asking,” Josh demanded.
She tried to tell him that she was sorry, but “we needed to get things moving….”
“No, we didn’t. You just did an intervention on my wife without her permission. You did NOT have permission to do that.”
Everyone remained silent, and my labor almost supernaturally stalled for these few minutes while the confrontation ensued.
And then he demanded, “Get out.”
She stood there with wide eyes, as if he was about to change his mind.
“LEAVE. NOW.”
And that’s how Josh fired our doctor while I was in transition.
She set down her stuff and walked out.
We all looked at each other and kind of regrouped, while I told Josh it was okay.