God says no; Seeking self-care against the stigma

April 15, 2018
I have had a very difficult life. A lot of people really don't know; while I do volunteer the information, I think a lot of people just assume that because I don't have serious detriments in my life, like alcoholism or a drug addiction, that I am a fairly responsible and well-rounded person.
On the contrary, I came from an extremely disturbed and broken home. I remember being young and asking God to keep me safe; asking him to send me a husband who would rescue me.
I was blessed to meet a man at 17 years old who swept me off my feet, married me after only a few months, and treats me like a princess.
The fairy tale doesn't end there, though.
We struggled in our early marriage due to my anxiety and depression. He didn't have much experience with mental health issues. He did his best to coach me through my anxiety attacks, reach out and nurture me during my depression, and just be understanding that many of my symptoms were things I simply couldn't control.
At one point, I had self-diagnosed bipolar. I seemed to fit the description - manic-depressive cyclic episodes. My mom was diagnosed bipolar. I knew what to look for, and having that knowledge for myself actually lead me to much better coping mechanisms. Things were fine.
After the traumatic birth of my fifth child, I began to see a new disorder that I hadn't noticed before. I had full-blown PTSD. The anxiety and depression got worse than ever, and several things seemed to be affected by this; my distraction, memory recall, forgetfulness - all things that I've dealt with since childhood and assumed they were just *me*, but now they were getting to the point that they were severely affecting my quality of life.
Fast forward a little farther to my little darling Archer. 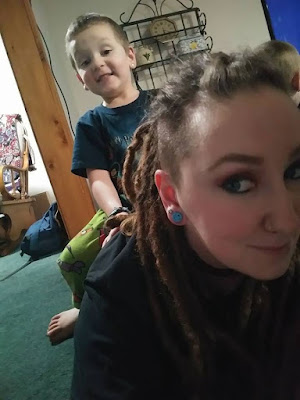 I want to address a few opinions before I close up this blog post, and I'm going to assume they apply to most mental health issues:

1. I do not enjoy having ADHD. It is not cool, fun, or trendy. I don't like the attention it gets when I say, "I have ADHD."

2. I am not ashamed to tell people I have ADHD. There's nothing shameful about it. I can't help it, and I will be this way forever. It's not *that* big of a deal.

3. I know what ADHD is. Do you honestly think I would be interested in medicating myself for hyperactivity? ADHD is not just hyperactivity. And I am fortunate enough to not just have every single ADHD trait, I also have them all very severely.

4. Yes, it's part of who I am. I am not compromising my temperament or personality by wanting to fix things that are wrong with me. If I was missing a leg, would you tell me it's "who you are" and that I should not get a prosthetic or a wheelchair? That's insane.

If you have any questions or even if you just want to tell me how ridiculous ADHD is and that "they just want to medicate people," I'm happy to have a conversation about it. That's just not what this blog post is about. Really, I just want the collective "you" to show love to the hurting, whether you believe in mental illness or not. Be an advocate for self-care, because there's nothing sinful about helping yourself.