How we do solids 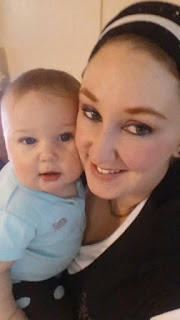 This here...this is my bubbeh takes. He actually responds to "Bubbeh Takes" more than he responds to "Jericho," or as we more often call him, "Jerko Jerko."
Unlike my first child, who was given a puke-soup concoction consisting of watered down and pureed carrots promptly at 5 months old, Jericho is not really being fed any solids yet. And when he does, it will not be baby food from a jar or any liquefied substance.
After carefully transitioning four children to solid foods already, I have a pretty good idea of what I'm doing. Of course, our methods (ours... as if my husband cares to have any say in this subject which I have researched extensively) may vary greatly from yours. And that is *probably* okay - I say probably simply because there are still mums out there who think it's acceptable to put rice cereal in their two month old baby's bottle so he will "sleep better." No. Just stop, please.
I'm all about baby-led introduction to solids. That doesn't mean that I start stuffing my baby full of solids as soon as he becomes fussy during a time of day that he has never previously been fussy. That's just not an indication of needing solids. There are several indicators though that I follow to assess whether or not my baby is ready to start trying foods. Now, this is based off of the idea that I honestly believe they don't need runny foods off of a spoon to get them started.

1. Baby is able to sit appropriately to feed himself.
When your baby can sit completely unassisted and you don't feel like you have to put pillows around them to catch them, it is a good indicator that they could handle feeding themselves.


2. Baby can grasp items the size of a pea
Since baby will primarily be eating items the size of a pea (hey...they might even be eating an *actual* pea!) it's safe to assume that they are ready for it when they can effectively pick it up and put it in their mouth.
3. Baby can get things into his mouth
If your baby can pick up these tiny objects but not actually put them in his mouth, he's probably not quite ready yet. That coordination is learned at a specific time for a specific reason.
4. Baby tries to mash with gums
If you notice your baby (who is now sticking things in his mouth) is moving things around with his tongue and trying to grind them with his sweet little toothless gums, he is ready to chomp on some food. If he is no longer pushing things out of his mouth with his tongue, that's a good sign as well.
5. If he is staring at your food and moving his jaw up and down
I only really pay attention to this if he seems ready in every other way because honestly, I have seen babies around three months old start taking an interest in solids. Unfortunately, wanting food is not the same as being ready for it. 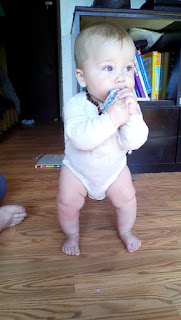 So here is my littlest guy around five months old, I believe. And yes, he is standing independently. My kids have all been pretty physically advanced. And he is doing all the things on that list I made. Does this mean I start giving them food super early? No. Because I'd rather cautiously wait if possible. I'd much rather have them get no solids for longer than get solids too early. Here's why:

Babies who are fed solids start to do this really incredible thing: I call it, OLD MAN POOP. It's where those breastmilk diapers where you go from, "oh, yucky poo poo, your diaper stinky!" in your sing-song baby talk all the way to "Oh My Lanta!! What did you eat?? Oh, send it back to the fiery pit from whence it came, Frodo!"
There is no going back.

The other thing there is no going back from is *feeding solids* in general. You can't just stop feeding your baby solids. You only go forward, not back. So if you think it's so cute and grown-up to give them four jars of baby food a day, you have to keep on doing it. Even when it's not cute and you realize it is a huge chore.

There is a huge lack of control once you start solids. If grandpa sees that you gave junior even one taste of a french fry, he's gonna be handing him an entire milkshake tomorrow. Once they see you give baby the goods, they'll introduce foods without your permission so fast it will make your head spin. Believe it or not, they are even more excited than you are to get your baby started on real food.

It's really, really bad to give your baby food too early. Children who get solid food at too early might be at a greater risk for developing chronic diseases, such as diabetes, obesity, eczema and celiac disease. Even spending ten minutes on the internet reading about feeding solids too early will give you an idea of what kind of health risks you are making. For some strange reason, 40% of babies are given solids too soon. That's almost friggin half. Why? What is the reasoning? Are people thinking that age is the most important factor in when to start solids? It's just a number, and one that cannot reflect a baby's readiness for solids. 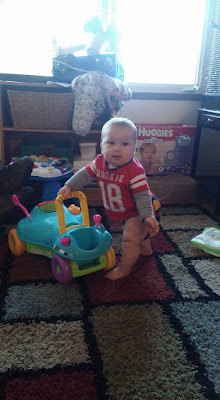 Here is my fat little guy today. He is 22.5 pounds and 27.5 inches, and just turned 7 months old. He had a few bites of potato out of my soup at dinner time, and he loved it. The other day, I put a few avocado pieces in front of him and let him try to get some in his mouth. That's the extent of his solids intake. And at this point, that is all he needs.