November 09, 2012
Well, I'm working on a few different blog posts right now and none of them are getting finished in a hurry, so I thought I would throw this one out there real quick to let you know what's been going on in my life lately.

Everyone is in the throes of homemade, hand-crafted goodness this year it seems, and there is no shortage of pumpkin-things circulating Pinterest and a few less-crunchy corners. Now, don't be fooled. This is not one of those picture tutorials with seemingly professional snapshots, gaffer-rigged lighting, and apparent countless hours of creating the perfect backdrop to compliment the greatness of an expensive Canon Rebel camera. Why? Because I'm going to tell you how I made a friggin coffee. You don't need pictures for that. Don't be greedy.

I did however take a pic on my phone, and then jazzed it up with five minutes of free time and microsoft paint.

Hey... my husband's laptop doesn't have all the awesome artist software.

I used the "spraypaint" tool. 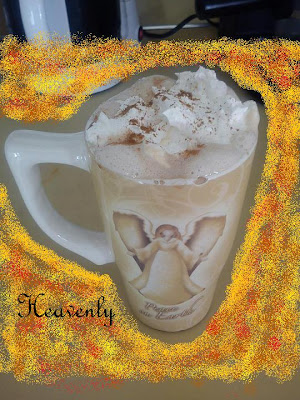 Amazing right? My artistic genius blows me away sometimes.

Anyways, I would honestly LOVE to give credit to the creator of this recipe originally, but I don't know who invented it. My mother-in-law found it on Pinterest and I tweaked it a few times until I found it to be to my liking. I'm sure there are a million just like it on blogs and being shared on Facebook and whatnot, but here is the "recipe" that works best for me.

This is a lengthy description of what I do:
(or you could just throw it all together. It's kind of self-explanatory.)

I put the 2 cups of milk in a saucepan on the stove, on HIGH. Because I am impatient, I heat everything on HIGH and it usually boils over. You don't have to turn the burner up all the way. Then I add 4 heaping tablespoons of squishy pumpkin from a can, 4 teaspoons sugar, 1/4 teaspoon pumpkin spice, 1 teaspoon vanilla, and a few dashes of cinnamon.
I whisk it all together and immediately run to my espresso maker. I start four strong shots of coffee, then check back on my latte mixture.

Now, let me pause for a second to let you know some variations. Typically, I swear by REAL vanilla. Not that fake crap. But for some reason, the fake crap actually tastes better in this. Sometimes if I have fake vanilla, I use 2 teaspoons. And by teaspoons, I mean capfuls. Cause that's how we ALL measure vanilla, correct? Also, if you want to reduce sugar or carbs, you can make this nearly carb-free (although not *quite* as tasty). My diabetic adjustments are:
Replace the milk with half whipping cream and half water.
Replace the sugar with 4-5 packets of stevia sweetener.

Also, you can adjust the pumpkin spice to your liking. I found, though, that any more than 1/4 teaspoon made it super grainy. I don't like sand in my lattes, so I cut it down quite a bit.

And the final adjustment is for chocolate lovers. I honestly don't see the point in drinking any coffee beverage sans chocolate. It just holds no appeal for me. So I throw in a few teaspoons of unsweetened cocoa powder into the latte mixture. Okay, it's probably more like a few tablespoons, but since I just shake the box, it's really hard to say for sure.

Once the espresso shots are done, your milky latte goodness should be boiling over and making simmery noises on your burner.
Oh... you didn't turn it up that high? Okay well then mix your espresso shots into your perfectly tempered latte mixture.

To finish it off and make it beautiful, pour it into two REAL coffee cups. Not those dinky little drinking mugs that non-serious coffee drinkers (or even worse...TEA-drinkers!!) would use. I'm talking about the big 16-ouncers. Top with a few tablespoons of  whipped cream and another dash of cinnamon and VOILA! Pumpkin Spice Lattes.