Every Good Gift and Every Perfect Gift is from Above 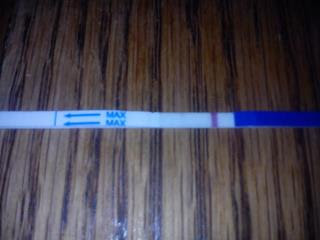 Of course, by the end of the five minute timer, I was certain. It was a positive pregnancy test. What does that mean again? I forget.

Josh was still in bed, so I walked into the bedroom and firstly, apologized for waking him up. I told him there was something I really needed him to look at. Surprisingly, he didn't even grumble, he just asked what it was and clambered out of bed.
I dragged him into the light of the kitchen window to interpret the near invisible line of my most recent pee stick.
He asked if it was positive. I was hoping he could tell me that.
I informed him that two lines means pregnant, and many hugs and kisses and "I love you"s later, I was still in shock.
When Rowan woke up, I dragged her into the kitchen as well to examine my test.
"This line means the test is working...and if you see this second line, it means you are pregnant."
She stared.
"Do you see a second line?"
"Yes," she answered, confused.
"So what does that mean?"
She stared at me in disbelief. "You're....pregnant?"
"Yep."
"You're pregnant....today?"
I think she is in shock, too.
When my mom finally arrived, Rowan showed her the test.
She just looked at me and said, "Are you serious? Is this real?"
Needless to say, no one was expecting this today.

My mom, who is apparently legally blind, refused to believe the pale little pink mark on the stick. She insisted upon a bigger, more expensive test with a more easily read result. About half an hour later, we had this:

Somehow, it feels refreshed. You would think that after a year of waiting practically every day and wondering if this might be the month there could be no surprise. On the contrary, we are all still recovering from the surprise of it all.It feels all new though. It's sort of like that reborn feeling that you get when you have strayed but then you come back and begin to do right again. The timing is more perfect than ever - I've had just enough time see what I have been doing and try to fix myself in a few ways. I've been able to re-focus on the Lord. I've been able to grow my faith enough to tell people that we will literally accept and appreciate ANY number of children the Lord blesses us with - yes, even if it's twenty. I see now more than ever that the Lord's timing truly is absolute and perfect, and I kind of feel bad for anyone who tries to do it on their own without Him.
I spent the better part of my day just whispering to myself, "Thank you, Jesus, thank you..." because I was so overwhelmed at the perfection of it all that I couldn't even think of anything else to say. To top it all off, Josh is just as happy, thankful, shocked, and excited as I am. It is the biggest comfort knowing that my husband's heart matches mine in faith of Christ.
May the Lord will continue to use us, our trials, and my blog to reach the hearts of others in any way possible. And thanks, to all my readers, for sticking around this long. And to all my friends and family, whether readers or not, who were supportive of our decision from the beginning - and those who came around.

The Huskey family has an important announcement to make, and my children would like to contribute to the visual affect. So, without further ado, here goes! Huskey #4 is on the way! We are extremely happy, and feeling extremely blessed. The Lord has been gracious to us, and shown us His perfect timing and for that, we could not be more thankful.  Thank you Jesus!