Menstrual Pads. Yes, Menstrual pads. Or "pads" as they have come to be called.

January 17, 2012
Yesterday, I set out to make my own pads. They are obviously much more cost-efficient, easy to make, and better for you, considering I don't plan on putting any chemicals in them. One of my favorite things about making them is that they don't have to be pretty or especially well-made - because I essentially plan on them never being seen by anyone, ever.
Your first thought will probably be something along the lines of "ew, gross."
Do you remember what your period is? I am pretty sure there is nothing in this world that will make it less gross. In addition to that, you have probably had accidents where you leaked through your tampon or pad and got blood in your underwear. Did you look at your panties and say "oh that's disgusting!! I am throwing away these disgusting things right now!!"
Maybe.
But usually my response is "crap...I hope that washes out."
Disposable pads and tampons have only been around since the 40s. Before that people did what I'm about to do... no, not crochet a tampon - which I think is absolutely the coolest thing ever and I am willing to learn to crochet just for that alone.
Anyways, so I ransacked my fabric box this morning looking for viable scraps. That's another awesome part of making your own, they require so little fabric that it was fairly easy for me to turn up scraps here and there. Obviously you can go and buy fabric if you want to make beautiful and unique pads to show off to the world. Since mine will be in my pants or in a drawer basically at all times, I don't care what they look like.


So I pulled out all the flannel, fleece, and PUL I could find.  Along with that I pulled out two old stained shirts that we were getting rid of anyways. The pile on the left is flannels, then fleece, then cotton, then PUL. The flannel is for the bottom layer, to be sewn to the PUL. The fleece is for the topmost layer, because it will wick moisture straight down through to the absorbent layers. And finally, the cotton is for absorbing.


I tried printing off a pattern, and my printer became angry and shut down. He does that frequently, so I left him alone and decided to make my own pattern. While that may sound super great and crafty, I really just mean that I sketched out a pad on a file folder. And I did so using what any intelligent woman would use for guidance - my favorite pair of granny panties.


I traced two "patterns," one with wings and one without. These will become different layers in the finished product. 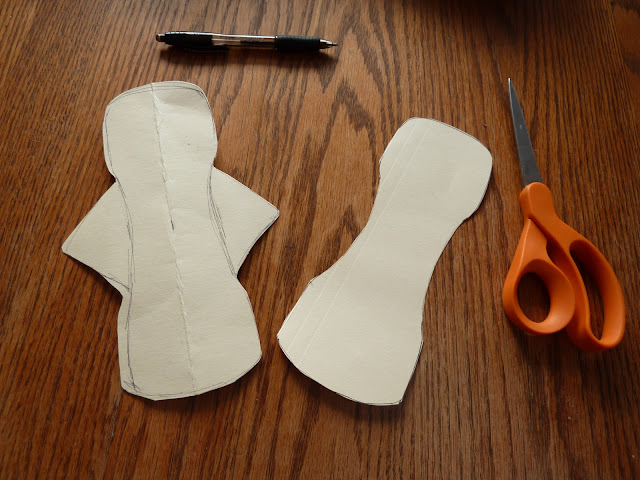 I started making two at once, so that the different angles could be seen easily in the pictures. I traced the wing pattern twice on the PUL, and twice on my flannel. These two layers will be sewn together.

One cut out of flannel goes on one cut out of PUL, making sure that the plastic side of the PUL is toward the outside. Although now looking at the picture, I don't remember if I did it that way. I guess it doesn't really matter.... maybe just one of those "rules" that are pointless.


I cut out two fleece (because I am making two pads to start with, remember?) and then I cut two sets of two layers of cotton from a shirt sleeve I had lying around. 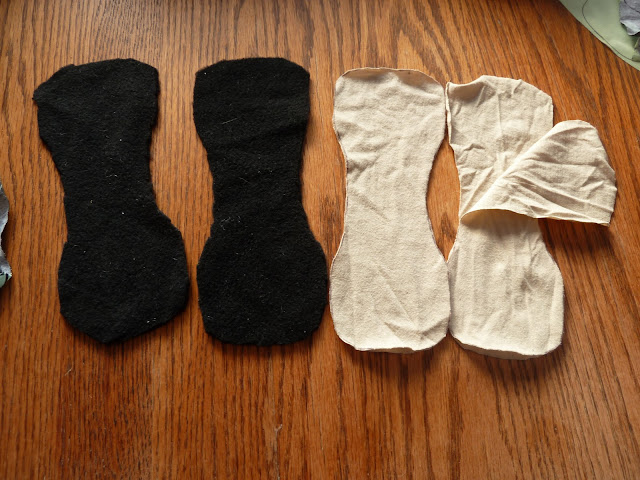 I needed one more layer of cotton for each pad, so I cut two layers out of another T-shirt and stuck one into each of the sets I already had. This will be the absorbancy in the center.

The two non-wing cuts go together (duh) even if you had a really hard time cutting the fleece and it ended up cattywompus....  huh? What? Yeah, you. And by you, I mean, I did that.


Then, I cut out the wings. I did this separately for a few reasons - I didn't want to waste the absorbent material by cutting them out with wings on them, and I wanted the wings thin, but still with enough extra fabric to help reinforce the snap that needs to be installed at the end...the reason I didn't cut the fleece layer with wings is because sewing fleece sucks and I wanted to make the fleece bit as simple as possible. I cut the wings out of flannel. 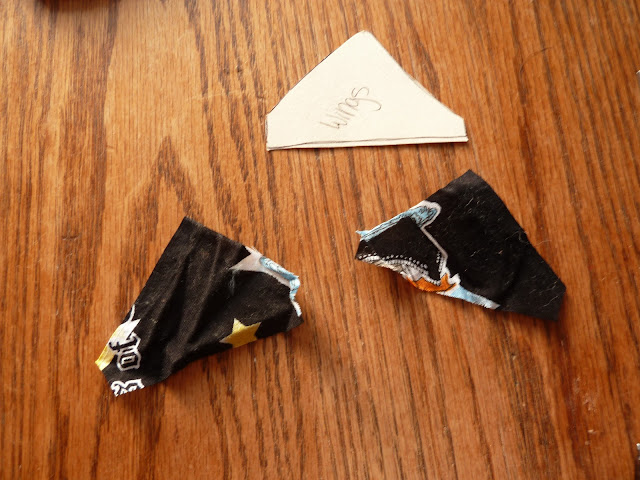 Then I dug out Nastasha.


If you want to know any settings or anything that I used, please don't ask. I have this nifty little cheat diagram that slides out from my sewing machine, but I have no idea what any of it means. I basically just try to guess which numbers are referring to which dials, and then if it's wrong, the thread will be too tight and it will break (as you can see by the first few stitches I made on this very project) and then I adjust one or two things until it works. I was never taught how to use my sewing machine, by the way.

The layers with wings need to be sewn together, and so I started just past one wing and went around the edge until I came to the next wing. 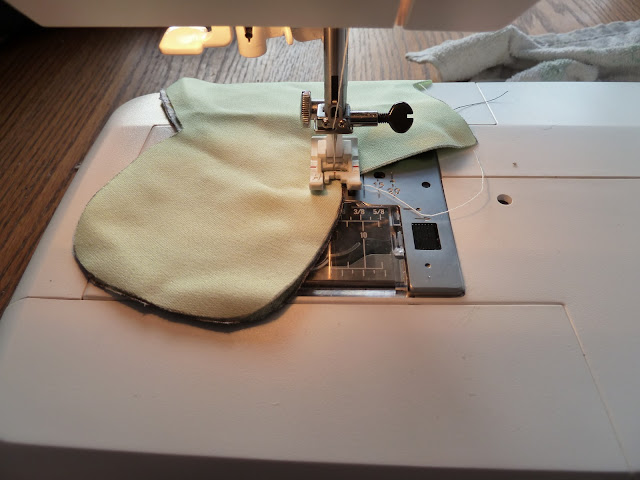 And this is a perfect example of what it looks like when the stitch is too tight. See that beautiful first inch of knotted thread and twisted fabric? 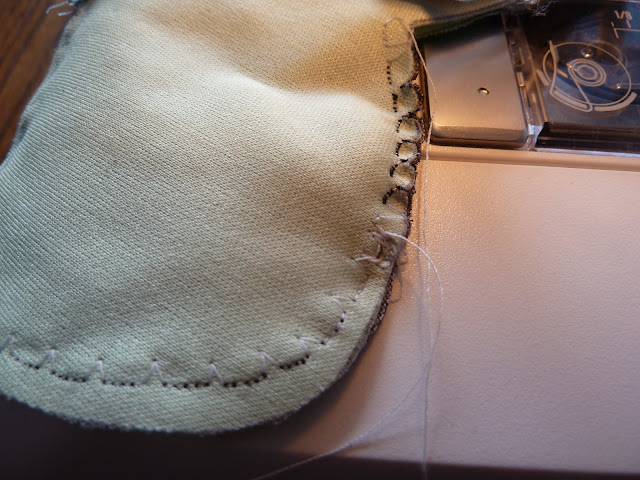 I stopped at the next wing I came to, and then I sewed the flannel top of the wing on. I just laid it down right where I had stopped sewing and sewed over it as if it had been there all along...it was a lovely moment between Nastasha and I. 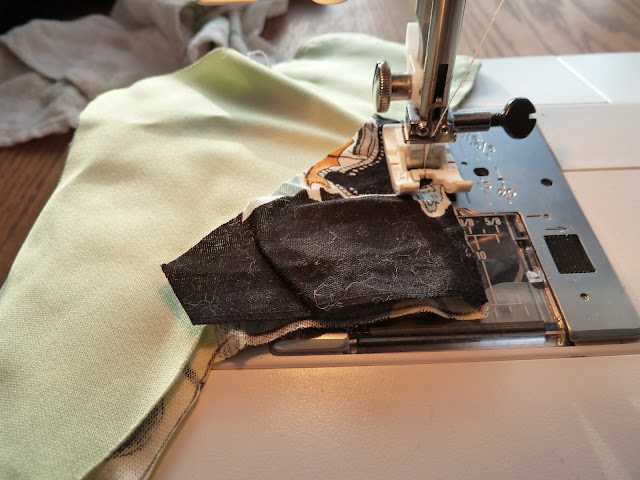 I sewed both wings on (cause it wouldn't make sense to only do one) and then I took a picture because that's what you do for a tutorial.

Then I took the fleece and cotton layers and laid them over the franken-pad I had begun.
Okay, I know that typically, when you sew something, you are supposed to sew the two different pieces front to front (inside out) and leave a small section open so you can turn it inside-out (now right-side out) and have a beautiful finished-edged work of art.... but honestly, this thing is going in my panties. I am not going to spend an extra 20 minutes trying to make each one beautiful. That just isn't in it's job description. Maybe in the future, if I make them as gifts or something, I will turn and top-stitch them. But it just didn't seem practical here, especially with how inadequate I am at sewing.


I then sewed just around the edge of the fleece this time - not out on the wings (duh). And then my favorite part: snaps! Yay! 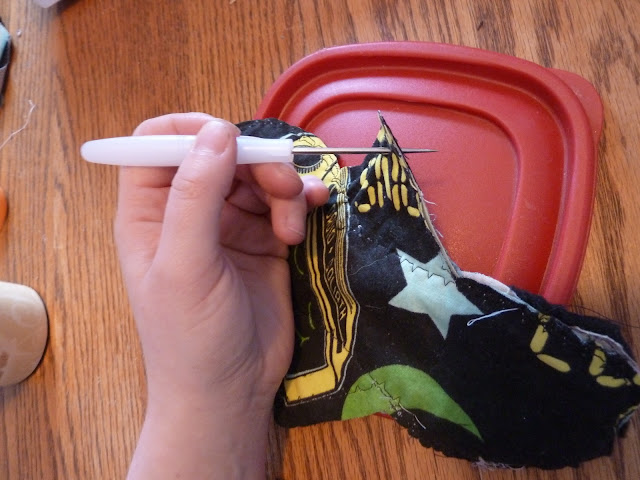 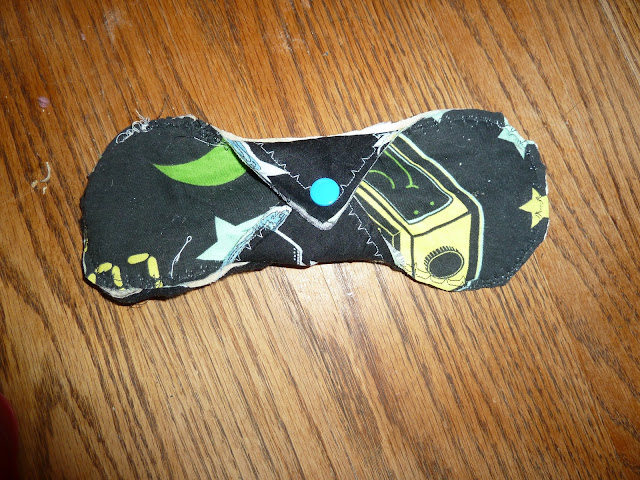 Here is the finished pad. Like I said, it isn't the prettiest thing I have ever seen. But I didn't make it to look at, I made it for function. So if you decide to make one and want to spend an hour making it nice and pretty, be my guest. 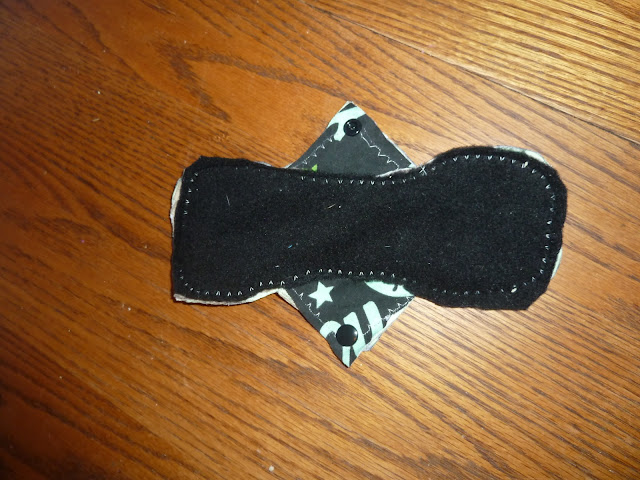 The thing I know you are wondering is whether or not it works.
I made these especially short because I am very short. Most people would probably need these to be a little longer and probably a little wider too. As for this size for me though, they work amazingly. I am not a fan of pads at all, but I plan on completely switching to these (or reusable tampons) from disposable products. If your only hang-up is that you don't like pads, I suggest you make one to try out. Honestly, they feel so much different from store bought pads. I plan on making eight more in this size and then ten in a pantyliner sizer.  If you still think it's gross, just remember - about 70 years ago, disposable feminine products were unheard of. It didn't suddenly become not gross to be on your period just because you could throw the thing away that you bled on. Not to mention, if you google around, it might frighten you what is in your tampon - these chemicals are basically being inserted into your body to be absorbed almost directly into your bloodstream.

If you are on board with this whole "reusable feminine product" idea, or as I like to call it, Look-I-Made-Pads, here are a few links to check out for different things you can make yourself.